Coach Holmes’ basketball career began at Presque Isle High School where he was an All-State player in the early 80’s. He went on to be an All-Conference collegiate player at the University of Maine Machias. Coach Holmes’ coaching experience includes years as the head coach at Windham High School and as an assistant at the University of New England.

Professionally Lenny has a Masters of Science in Educational Administration and has served as a Teacher, Athletic Director and Assistant Principal.

Tony Staffiere brings 15 years of college basketball experience in both men’s and women’s basketball at the NCAA Division I, II, III levels. Coach Staffiere has been a head coach in men’s and women’s basketball at the NCAA Division II and III levels.
Most recently, Staffiere was the varsity girl’s basketball coach at Mount View High School where he led the Mustangs to their first MPA State Tournament in over eight seasons. For his efforts, he was named the 2017 Kennebec Valley Athletic Association Class B Coach of The Year.
Staffiere relocated to the Waterville area in 2010 to serve as the top assistant women’s basketball coach at Colby College. While at Colby in 2010-2011, the program won 22 games and advanced to the NCAA Tournament Second Round. Working with the team’s post players, he helped develop a D3Hoops.com All-American Honorable Mention honoree and two New England Small College Athletic Conference All Conference selections. 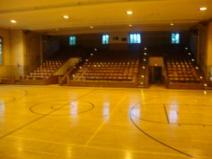